Bare With Me ~ Written by Anna Hamm (ne Jorgensen)

Kevin suggested I get naked.

Not as in nude naked, but as in bare-my-soul exposed; the real me… unfiltered, silly, smart, grandiose (or not), uncensored, the works.

So, I was going to title this blog: INJF — The Myers-Briggs Personality Most Likely to Believe in Conspiracy Theories.

Then I was like, “Anna, do you really want to get into all that here?”

And I answered myself with, “Nah.”

One of the benefits of being a Gemini is always having someone to discuss the options with.

Before we move on to other things, remember when I said I wasn’t really OCD anymore?

Okay, maybe I never officially wrote that anywhere — and with good reason!

Apparently, it’s not true, I am still a tad OCD.

I’ve surely completed over 250 hours of research these past couple months reading “official” studies on viruses and everything remotely related not including watching the “news.”

But don’t worry! I won’t go into what I learned because —

For those of you who’ve followed my silliness for any length of time you know my main celebrity squeeze (read: fantasy crush) has been Gerard Butler.

However, I’ve come to the realization that as much as I love his personality, we’re simply not compatible.

There is also that pesky problem of Gerry’s long time girlfriend, Morgan Brown, even though when you’re dealing with a celebrity crush this is all make-believe.

Nonetheless, in my fantasy world, here’s why The Gerry and I are not compatible:

I mean isn’t it crazy that I didn’t see these major red flags all these years??

That, my friends, is exactly why we should never let sexual attraction cloud reasonable judgment!

For those who haven’t followed my journey, you may not be aware that I have never actually met Gerard Butler — or Jon Hamm for that matter — though I have had 19 dreams about him (Gerry) wherein he is generally rejecting me in one way or another.

Even my subconscious mind knew better!

Who is Jon Hamm?

Thank you for asking.

Jon Hamm is an actor most famously known for his lead role in the Netflix series Mad Men. 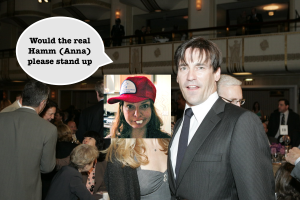 After reviewing various male celebrities as prospects for my new crush, Hamm has been unanimously selected by a panel of two (if you include the other Gemini me).

Other celebrity considerations were Brad Pitt, Leonardo DiCaprio, and the guy who most recently played Superman in the, yep, Superman movie.

Seemingly shallow, I agree, but let’s take a closer look at why these men were selected and thereafter eliminated.

Keep in mind all of these fellas probably have several overlapping traits but in the interest of limiting the lists, I went with whatever popped into my mind first.

Remember, we are in Fantasy Land so, “6. Has a million better options than Anna J.” does not apply.

Now for the Hamm Man…

Of course these lists are based in my mind not on facts other than the subjective factors like appearance.

Unless someone has gone through something painfully tragic and/or suffered from depression (tragic in itself), I heavily doubt they could relate to the abyss-level depths of my psyche.

Maybe I’m not so shallow, after all.

Regardless, Mr. Hamm it Up is off the market which ironically makes him the perfect new celebrity crush.

By the way, other less famous, but notable, folk I admire (but don’t crush on for various reasons) include:

Some of you are now wondering if I’m single.

If you’re Jon Hamm, I’ll get back to you shortly. 😉

A final note about Kevin and John.

Kevin is a person — I assume a man — named, yes, Kevin. Kevin left a public comment about baring my soul. If you are also named Kevin but didn’t leave the aforementioned comment, then it is not you I’m referring to.

Likewise, John. John is a person’s name I used as an example in a recent Wingmam video. The name ‘John’ was selected randomly because it’s a common name. If your name is John, I was not referring to you specifically.

Funny how everyone thinks it’s about them.

Now that I’ve been naked with you for over 1000 words, ima sign off and message my sister about those cream puffs.

What have we re-learned?

Unfortunately, because of some “enthusiastic” fans who take “naked” literally and/or who have inappropriately commented on my ta-tas (tsk tsk), I no longer receive email replies from subscribers to this site, but please do be like Kevin and leave a public comment.

If you’d like to support my naked prose, please donate here.

If you want more of my bare-ass naked writing, buy my memoir here.